Programme Officer Sue Turnbull looks forward to the first concert of the season with a taster of what to expect from each piece.

Shicksalslied (Song of Destiny) is an orchestral accompanied choral setting by Brahms of a poem by Friedrich Holderlin. Along with his German Requiem it is considered to be one of Brahms’ best choral works, although much shorter, at 15-16 minutes.

The original setting included two verses with the third movement a restatement of the first but Hermann Levi, who conducted the premiere in 1871, suggested that Brahms reintroduce only the orchestral prelude from the first movement with a rich instrumentation.

Johannes Brahms was born in Hamburg in 1833 and died in Vienna in 1897. Though well known as a pianist he had trouble finding recognition as a composer.

He finally won a position of influence as a conductor of the Vienna Singakademie and later as director of the Vienna Gesellschaft der Musikfreunde but the demands of these posts conflicted with his desire to compose. The German Requiem and the Variations on the St. Anthony Chorale were rapturously received bringing international renown and financial security.

Brahms’ greatest choral work is the German Requiem but Shicksalslied and the Alto Rhapsody are generally considered more romantic.

Die erste Walpurgisnacht  by Mendelssohn is a secular cantata for choir, soloists and orchestra based on a poem by Johann Wolfgang von Goethe telling of the attempts by Druids in the Harz mountains to practice their pagan rituals in the face of new and dominating Christian forces.

It consist of ten movements, including the programmatic overture and lasts about 36 minutes. It was first performed in Berlin in 1833.

The attractions of the text for Mendelssohn may have been the ghost scene (compare his incidental music to A Midsummer Night’s Dream) and the triumph of an oppressed group in an occupied land – an important Enlightenment idea.

Felix Mendelssohn was also born in Hamburg in 1809 and died in Leipzig in 1847. He grew up in a privileged environment and was well known early in life as a composer of concertos, symphonies and sonatas and as a conductor and festival organiser.

His best known works include the incidental music to A Midsummer Night’s Dream, the Italian and Scottish symphonies, the oratorios St Paul and Elijah, his violin concerto and his piano composition – Songs Without Words.

He revived interest in the music of J.S. Bach, notably with his 1829 performance of the St Matthew Passion and is amongst the most popular composers of the Romantic era.

We’ll Sing is a 2020 lockdown collaboration between Poet Laureate Simon Armitage and composers Cheryl Frances-Hoad and Daniel Kidane which was commissioned by Huddersfield Choral Society and presented as two music videos in Autumn 2020.

Simon Armitage asked members of the Choir to choose one word that reflected their experience of lockdown. The words were submitted to Simon who used them as the inspiration for two sets of lyrics –‘We’ll Sing’ and ‘The Song Thrush and the Mountain Ash’ which were then set to music by Cheryl and Daniel.

These two compositions have since been orchestrated and are performed this evening for the first time in this new form.

Simon Robert Armitage, born in the village of Marsden near Huddersfield in 1963, is an English poet, playright and novelist who was appointed Poet Laureate on 10 May 2019. He is also professor of poetry at the University of Leeds.

He has published over 20 collections of poetry starting with ‘Zoom’ in 1989 and has received numerous awards for his poetry.

Cheryl Frances-Hoad is a British composer, born in 1980, who has been composing to commission since she was fifteen. Classical tradition along with diverse contemporary inspirations including literature, painting and dance, have contributed to a creative presence provocatively her own.

Daniel Kidane is a London-based concert composer, born in 1986, whose works range from solo pieces to large orchestral works. Often drawing from experiences from his own background and upbringing, Daniel’s compositions explore narratives, especially multilingual interactions in everyday life.

Rowena Burton met three of our new members and asked them all the same questions about their various HCS experiences so far. 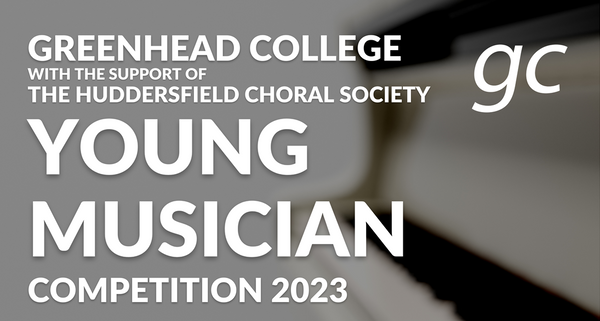 HCS is thrilled to be sponsoring the Greenhead Young Musician Competition 2023.

The fourth edition of our online newsletter - a collection of articles to whet your appetite for the upcoming season.